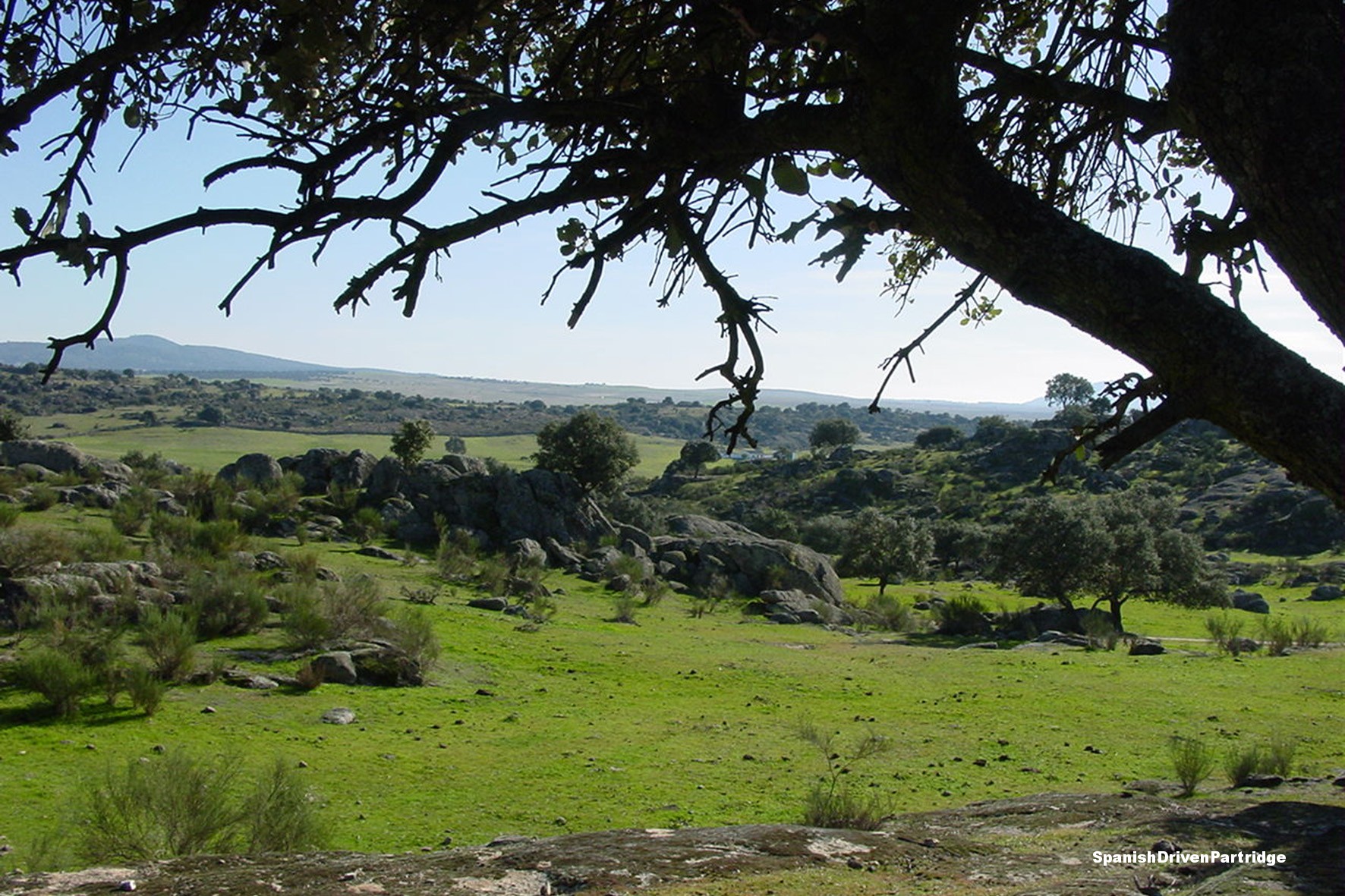 Red-Legged Partridge shooting in Spain. We truly aim to make our shooting the greatest test any hunter can face. We can also offer Duck Shooting, and Driven Pheasant Shoot in Spain

Each day's shooting begins with the drawing of pegs for the first drive. For the rest of the day, guns will rotate their positions after each drive, staying in the order established by the draw. In the blind (or butt), a "cargador" or loader and a "secretario" or spotter accompanies each gun.

Most of the butts are natural shooting positions, consisting of bushes that utilize the contours of the rolling terrain to take advantage of wind direction. Transportable, camouflaged blinds are also used for some drives.

The terrain is often steep and rugged in the areas where we shoot, allowing a challenging shooting test. Please note that the shoot organizers do not supply personal effects such as earplugs. At the end of each drive, the shooting staff picks up the guns and returns the shooters to the vehicles for a drink.

Lunch is normally served between the second and third drives and there are normally four or five drives during the day, where a minimum bag of 500 birds is sought. At the end of the day, a rug of partridges shot during the day is displayed.

As professional hunters, we feel a deep love and respect for nature. We feel it is our duty to have the highest ethical hunting standards in spain, from the release to the shooting of the birds. With our well trained dogs, we ensure that all birds are picked up, leaving a minimum of wounded birds behind us. We ensure that all birds go into the food chain as delicious food in top restaurants or to our customers during their stay with us. We are honouring the game; by the ‘display of game’ by the end of the day.

Non-shooting members of the party can either join the guns in the field or visit the nearby beautiful cities for the day.

© Copyright 2013 - Spanish driven partridge ® - Legal Notice and Privacy Policy - Cookies Policy
Website by CONSEDAT
We use cookies that we have created on our own and those created by others for analyzing the usage and the visits to our web pages so that we are able to improve our services to the best possible manner.
If you continue to navigate on our web pages, we understand that you have accepted our usage of this feature.
You may also wish to contact our cookies policy so that you are able to correctly configure your web navigator for using the cookies properly.
Accept Read More
Cookies Policy

This website uses cookies to improve your experience while you navigate through the website. Out of these, the cookies that are categorized as necessary are stored on your browser as they are essential for the working of basic functionalities of the website. We also use third-party cookies that help us analyze and understand how you use this website. These cookies will be stored in your browser only with your consent. You also have the option to opt-out of these cookies. But opting out of some of these cookies may affect your browsing experience.
Necessary Always Enabled
Necessary cookies are absolutely essential for the website to function properly. This category only includes cookies that ensures basic functionalities and security features of the website. These cookies do not store any personal information.
Non-necessary
Any cookies that may not be particularly necessary for the website to function and is used specifically to collect user personal data via analytics, ads, other embedded contents are termed as non-necessary cookies. It is mandatory to procure user consent prior to running these cookies on your website.
SAVE & ACCEPT